Chapter 1: How I Became a Millionaire at 18

Welcome to a story probably heard many times before.  It is a fact: Most professional athletes go bankrupt within five years of retirement.  Why?  They have no concept of money management.

I did not either at age 18.  I made, at that age, approximately 2.5 million dollars (pre-tax) based on my accolades and business acumen.

Horatio Alger was a writer in the early 20th century.  Most of his books, if not all, were centered around a young boy with a spunky attitude, drive for success and a touch of luck.  In other words, rags to riches stories.

There is more to it than that, however.

There is a moral here.  One that anyone can take and use for themselves.

Greatness is possible for anyone.  I want to inspire YOU, my reader, and myself, which I have done since this blog was written.  Follow along with me; see what happened.

This rollercoaster I call my life started in 2005.

It is shocking to think it has been a decade since this all transpired.  In July through October 2005, I was programming almost non stop.  If you have seen movies with the hacker or programmer hammering keys like there is no tomorrow, that was me.  I had only recently turned 18 and was living in my second apartment.

Michael Bale was my first roommate.  We had been pals since elementary school and had the same interests: Making money on the Internet.  We also played Counter-Strike 1.3 like mad men.  We both went our own ways for a time, and I moved in with Kurtis into this, my second place.

Kurtis, my then roommate, and I had an agreement.  He could live there essentially for free if he would help me with my coding.  I was a webmaster at this time: Photoshop, art communities and at the time, MySpace was hot.  My two sites I remember well are a humor site, thehumorworld.com, and an art community, iDesignThis.com (this is pre-iApple everything).

My days were spent in the same pattern: Wake up, code, drink a 12 pack of soft drinks, eat, sleep, repeat.  I had dropped out of high school at this point.  I wanted to earn a decent living through Internet advertising: Google Ads, banner ads, if it was on the Internet, I wanted a cut.

I had made some money, about $20.00 to $150.00/day depending on how hard Kurtis and I worked on a project.  This was my life.  Rent was barely paid; food was almost non existent.  Being an entrepreneur in the early days of Internet advertising was tough.

I caught a break.  I sold iDesignThis.com for cash – $2000.00 on Sitepoint.com.  This was a major step for me.  It was my first Internet sale.  Kurtis had helped with the site’s interface, but all of the guts, that was 100 percent me and me alone.

I had picked up a handful of side work.  A friend in New York helped me pick up some work doing PHP/MySQL.

I discovered a MySpace site – Chasebadkids.net.  I was a heavy user of MySpace at this time, so I knew I needed a MySpace-related site.  Help sites, support sites and the like were a personal favorite.  Helping people navigate the Internet was something I enjoyed doing.  I built a site: MySpaceSupport.com.  It was Kurtis’ idea for the name, and he built the user interface.

For myself, I poured everything I could into it.  The programming, profile editor, tools, layouts – you name it; I did it.   Google Ads was turning a few dollars to me but nothing like what I wanted.  I say, shamefully, but this is where I caught my break, I started “MySpace Whoring.”

2005 posting on bulletins and having virtual friends was worth something besides exposure.  I had four MySpace pages with anywhere from 30 to 60,000 friends.  Granted this is nothing today, but in 2005, it was a goldmine.  I switched from coding to whoring full time so I could have the best online image possible.

I was an Internet star.  My friends went from 1,000 to around 50,000 in months.  I chatted with other MySpace Whores and ended up in a few rooms with some then Internet famous people like Forbidden (Google her).

I had other people posting for me.  Each post saw a surge in traffic to my site.  Naturally, it grew fast from linking, word of mouth, bulletins, SEO and the like.  This site exploded better and faster than anything else I have built.  I was bringing in $100.00 to $350.00/day with Google Ads.  This brings us to

I changed my advertising from Google to Yahoo.  I remember the night perfectly as it went down something like this:

Michael Bale came by.  He, and most of my close friends, knew I was actually making decent money at this point.  This is when I switched to Yahoo Ads.  It took some time, 4 – 8 hours or so, but I checked my account just to see.

Side note: Those who say money does not buy happiness are: a. poor; b. stupid; c. envious; d. all of the above.

My birthday is coming up.  You will see that in addition to making bad decisions, I made bad decisions that turned out 1. funny; 2. lucky; 3. incredible; 4. 1-3.  Here is one such story:

“’Has he come armed, then?’ she asked anxiously.  “Has he brought pistol or a sword?’

Ian shook his head, his dark hair lifting wildly in the wind.

So, I want to have a party for my birthday.  I printed up flyers, promising free booze, and put them all over Littleton.

The flyer made it to some of the local schools.  The police caught wind of it and camped out in front of my place during the party. 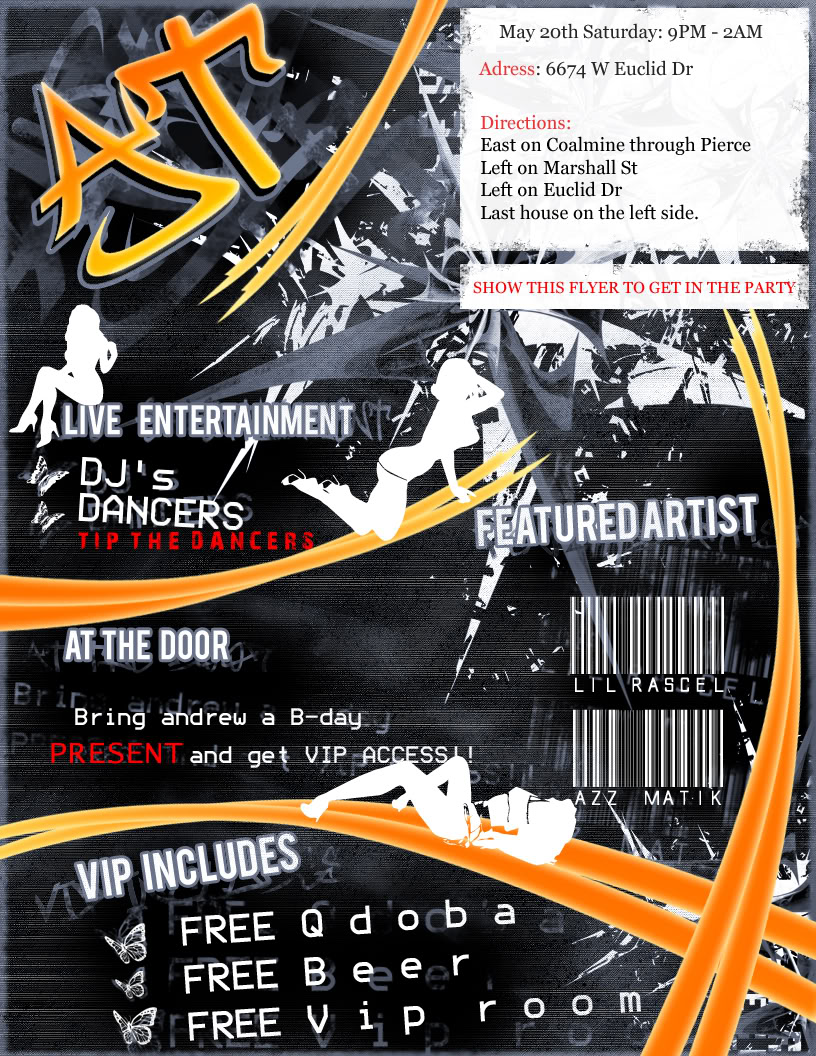 I am a 19 year old millionaire.  Do you think the police were my concern?

There were probably over 100 folks there I had no clue who they were.

I treated my place like a club: security, VIP ropes, bartender and some ladies to perform on my bed.  I also had four kegs.

The police broke into my house (possibly important).  Apparently, the police had something against my bouncers, who likely said the police were not welcome in a private residence.

Attorneys who go to the court for me and fight felony giving alcohol to minors, over 100 minors.

My attorney got the case dismissed.

That is not the best part, because I was a millionaire.

I never once sat foot into a courtroom.

I was a millionaire.

I could make things happen with the wave of a hand.  That had did have a wad of cash in it, and this was the reason things happened.

Rick, a friend of his and myself jetted off to Miami to rework MySpaceSupport.com.  This was the worst decision of my life.  SEO was something I did not understand, but I completely redid the site – Facelift, coding, URL rewrite and anything else I could think of at the time.  The site was #1 for Google and Yahoo, and this readjustment killed it.  My page rank, authority, power, anything – gone.  40 percent of my traffic was from search engines, 10-20 percent direct, and the other 40 percent from MySpace Profiles. I spent approximately $15 -20,000.00 in the redesign, and this decision lost me hundreds of thousands of dollars.

Side note: If it ain’t broken; don’t fix it.

We leave April for August 2007.  I move to San Diego with Rose, my ex, for about six months and then to L.A. for an additional six months.  Along the way I lost money and spent plenty on expensive rent.

For me since I was in the 6th grade building web pages and learning you could make money on the Internet starting in the 9th grade, all I wanted to do was make money on the Internet.  It was an all-consuming thought and drive.  At no point did I feel any remorse or second thoughts, I knew what I wanted.  This is why I dropped out of school.  I was coding non stop, and school was getting in my way of coding.  I had two passions: Skateboarding and coding.

I was always coding.  I did VB, C++, hacking/cracking, Subseven and landed on, and stayed with, PHP/MySQL/XHTML/CSS.

There I was.  I was making millions on the Internet.  One nagging thought sat in the back of my mind the entire time – What if I lose it?

“All that we are is the result of what we have thought. The mind is everything. What we think we become.” — Buddha

I had a vision; I had worked hard.  I hear two things from people constantly: 1. I have ADHD and cannot concentrate (Truth); 2. I am insanely persistent.  If there is something I want, I am not going to give up.  Period.  End of story.  Reader, you MUST persevere; I MUST persevere.  I will not reach the top if I do not.  The same can be said for you.

Those past years of experience made me lose faith in people, relationships, trust and have a difficult time putting any trust in anyone.  When it comes to making money, people will do and say anything they want you to hear to reach your level.

The Sword of Damocles is a story of a man who wanted to see what being a king was like.  The king invited the man to his castle for a feast.  The man took the seat at the head of the table, with food filling every space.  He glanced above his head.  Hanging above his head, by a single piece of hair, a sword.  If the hair would split,the sword would fall and kill him.  The man decided being a king was not worth it.

What does this story have to do with anything?  Simple: If you want the fame and money, you have to be in a constant state of awareness and keep your guard up at all times.

This is how I earned and lost two million dollars, and I will earn it again.

What happened?  I was 18 is what happened.  I am working on a book, Young & Stupid, that goes into all of this in detail.  All of the great things: Girls, cars, homes, home upgrades, trips, toys, Las Vegas, strip clubs, taxes are ephemeral and fleeting.  Invest; do not spend.  Put your money in stocks, commercial properties, accredited investments, hedge funds, IRA’s – anything else.

This will not happen to me again.

Yes; The toys and trips were awesome.  They also ate me alive.

It is only at the top where you can breathe and live to your fullest.

Trust me on this one.

So, what happened to my money?  Read Part Two: Young & Stupid: How I Lost My Millions.

Andrew Fashion an entrepreneur from middle school, Andrew had a knack for the business world. He dropped out of high school before age 18 and within a year of doing so, became a multi-millionaire.

Cool story thanks for sharing

Thank you for reading!

This error message is only visible to WordPress admins